Couric teamed up with “An Inconvenient Truth” producer Laurie David to make the film. Directed by Stephanie Soechtig, “Fed Up” uses historical footage and news events to show the causes and costs of obesity in the United States.

“This generation of children is the first to live a shorter life span than their parents, and it has ramifications in every aspect of our lives,” Couric said. “Talk about skyrocketing health care costs: the obesity epidemic is behind these health care costs. And national security: these people are too heavy to join the military … It affects so many aspects of our country’s health that we really need to start paying attention.”

Couric hopes the film will encourage others to take action, so the food industry will become accountable for its harmful products.

Social issues is a topic she says she’ll continue to report on at Yahoo.

“I wanted to be part of the transition that we see happening all around us in media,” she said. “People … may want the immediacy of having things on their mobile phone or on their computers. But I also think they want quality content as well, so hopefully we’ll be able to provide some of that.”

Yahoo CEO Marissa Meyer announced on Monday via Tumblr post that famous news anchor Katie Couric had been hired as a “Global Anchor” that would lead a Yahoo News team to cover stories around the world. Meyers expressed enthusiasm, stating that “..her experience is unmatched. Katie is dynamic, savvy and has a way of connecting with viewers that I really admire.” 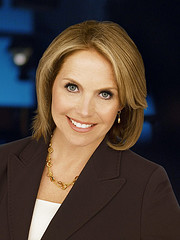 Katie Couric is certainly not hurting for experience. She has worked on-air for NBC, CBS and ABC while becoming the first female solo anchor of a news program during her time at CBS.  The post stated that Katie would continue to host her daytime talk show Katie on ABC daytime TV.

Gwen Ifill and Judy Woodruff are making history in the world of TV News. They’ll co-anchor PBS’ “NewsHour” becoming the first female co-anchor team on a nightly network newscast. The New York Times reports that Ifill and Woodruff will take over the nightly newscast in September, and they’ll also share managing editor responsibilities.

Hari Sreenivasan who was recently announced as the anchor of the “PBS Newshour” will also serve as a senior correspondent for the weeknight version of the broadcast.

The program was founded by Jim Lehrer and Robert MacNeil in the 1970s.